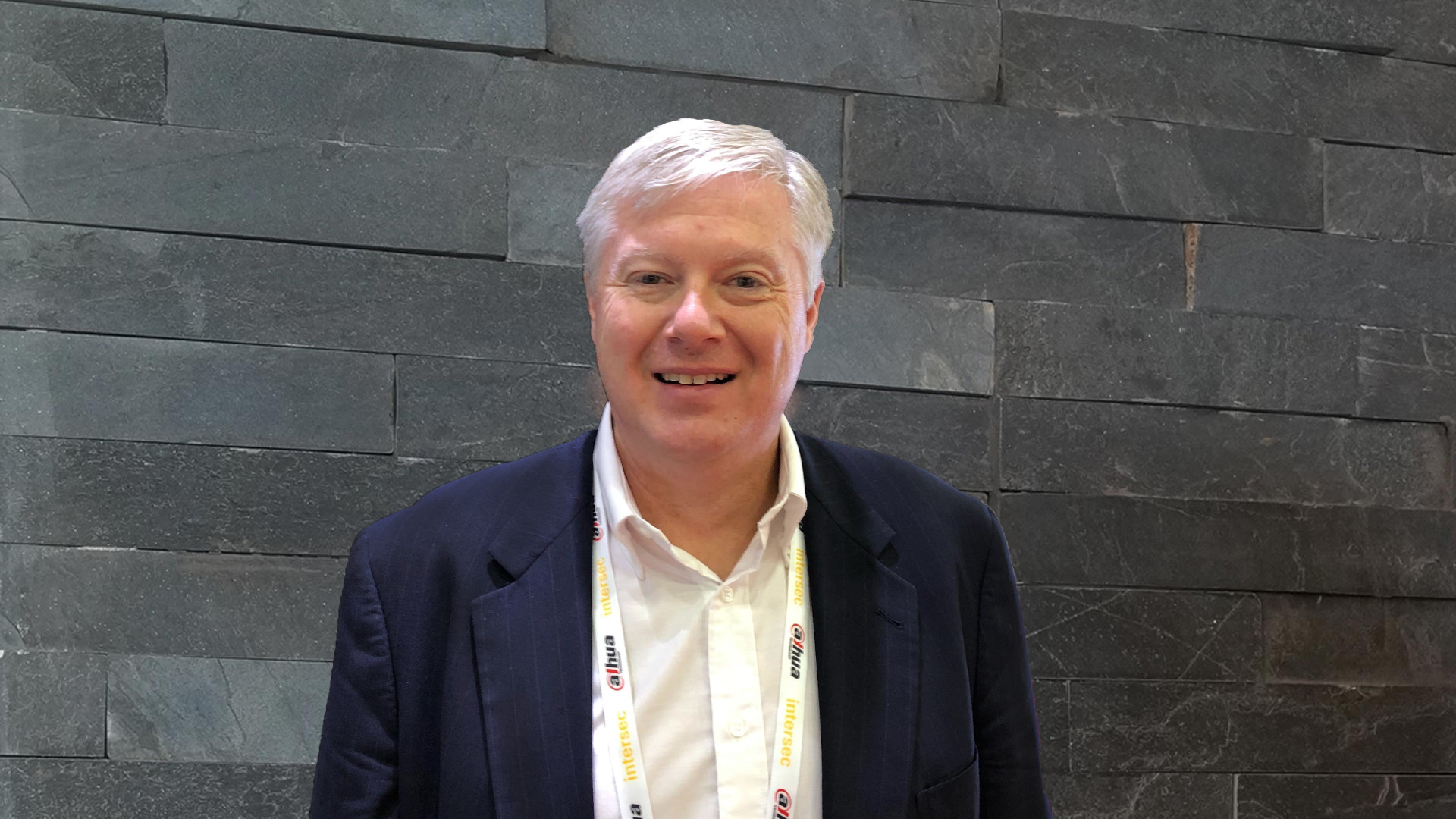 Q&A with Scott Starr. Why I'm Excited to Join Reacton

It’s been a couple months since Scott Starr joined the Reacton team. With a growing demand for our products globally we needed someone to head up our new US operation in Phoenix, Arizona and Scott was exactly the right fit for the job. Now that he has the offices in the US set up serving the North and South American markets and has things a bit settled, we thought it was about time we checked in to see how things have gone, and where things are headed. So, we fired a few questions Scott’s way.

How long have you been in the fire suppression business?
For nearly 15 years I’ve been promoting detection tubing systems. OK, not just promoting, but living with them, finding great new applications for them - and a few that didn’t work out so well. Solving problems, helping determine new product needs and finding a direction to fulfil those needs. When you spend enough time with something you become quite attached to it, for all it highlights and shortcomings. Let’s just say that when it comes to detection tubing, I’ve seen a lot over the last decade and a half.

Why did you choose Reacton?
I really expected to struggle with the idea of working for another fire suppression company, but seeing the vision of Reacton and the products they have developed, I realised that I could find comfort in the fact it wasn’t a copy and they were striving to do better. After spending time with the product, I’m convinced that they indeed have done better. Much better. I’m so excited about introducing this to the Americas and showing them the fruits of Reacton’s research and innovation. For me, I plan to be a part of helping to continue that drive for innovation for years to come and Reacton is really turning out to be a perfect fit.

Did you have any reservations?
When it was suggested that I look at Reacton, I was dismissive. I’ve seen a lot of copycat systems over the years and the idea of another copy didn’t excite me. When I first saw it, while overall looking familiar, I was struck by a very different looking valve. I thought - and hoped - that maybe there is something more to this. After spending the last few months with the systems, I can say with confidence there is a lot more to the Reacton systems.

Tell us a bit about the Reacton vision
I was surprised to learn that the company and products had nearly 25 years of history behind them, but that the product was never marketed outside of the UK. Sam and Edward had purchased the company five years prior, with the vision of improving it and expanding into the global market. To succeed they felt they needed to be better, not only better than what they had been, but better than what others had been as well. Better marketing, better support, better engineering and better manufacturing all leading to a better product. They had spent years analysing theirs and other product in the market and talked to users to find out what was important, and what could be improved. The result of that work is what they wanted to show me.

What’s different about Reacton from other fire suppression systems?
Many might call me geeky for getting excited about a valve, but I genuinely liked this valve from the moment I saw it. Made from all stainless steel, the main body consisted of two main parts that were finely machined and fit together so as to almost look as a single seamless part. It was significantly smaller than the usual indirect valves I was familiar with, with smaller discharge ports which concerned me. “Don’t worry about the ports,” I was told. “It’s a high-efficiency valve design. It performs better than those with larger ports.” I was cynical, but opening up the valve the agent flow path was clearly more efficient, and data was shared that showed the ability for this valve to allow more agent – both clean and powdered – to flow per second versus the larger valves. 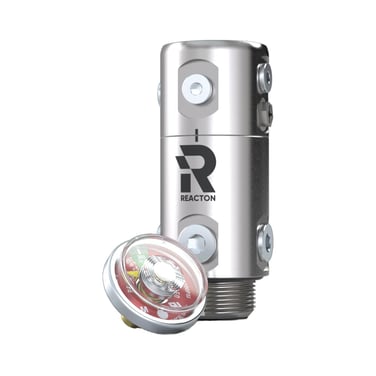 Moving on, the gauge, which on other systems protruded and often could be damaged, was placed higher in the valve and recessed, protecting it from the damage. Three discharge ports allowed a wider variety of hose and nozzle configurations, especially for larger systems. I asked how large and was told “up to 18kg, which is 40lbs to you.” Ok, that impressed me and got me immediately thinking about the wider array of applications we might cover.

So just that was enough?
No, that was just the beginning. While adding to the range and capability of the systems was a huge improvement, the advantages kept coming.

Taking the system apart, I was shocked to find that not only was the valve all stainless, but the siphon tube extending below it into the cylinder was stainless as well. “All of our components, including nozzles, end of line adapters and manual release are all stainless,” I was told by Edward. “We really wanted to make this system all-around better, and it starts with better materials”, as I was handed an end-of-line adapter and manual release, which were indeed stainless and had a really nice feel.

The final bit that was shared with me were the brackets. Now brackets for fixed installations really don’t see a lot of stress, so most fixed systems in this size range I have seen use extinguisher brackets, and Reacton was no different. However, when it comes to vehicle brackets, it is a whole different animal. Reacton had clearly thought this through, showing me thick, heavy stamped metal brackets that were the most durable I’ve seen. They had just successfully completed the SPCR199 P-Mark testing, which includes a very robust durability test of the complete system. Clearly this is a system that was built to endure a very rigorous environment. 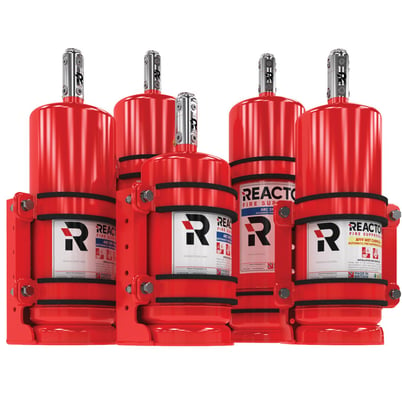 Supporting materials?
After impressing me with the product, we moved on to the support materials. Concise, easy to read manuals again highlighted differences to systems I had seen before. I could see how an installer would not only use this manual for training, but could also easily reference it to find the information they needed in a useful format. Other support materials were equally user-friendly, all the way to an easy to use, simplified price list.

But all one really needs to do to see how much different Reacton really is would be to look at the video animations they’ve created. From bus fires to heavy equipment to electrical systems, they offer amazing video animations that show exactly how the systems work, providing a clear vision to the customer of what they are getting – and a tremendous sales tool for our distributors to share with prospects.

So, what’s next?
We are still in the very early days and there’s lots more to do. We have the office and product in place and have some really great distributor partners already on board. We are growing our distributor network as there are still more markets, both geographically and by industry group, yet to cover.
This is an exciting time to have all the foundation work completed and be looking forward to the growth ahead of us! I could not be more proud to have joined this team and be a part of this fantastic product.

These Stories on Company Information

Safe From Fire While Sweeping the Streets of Dubai

Let us know what you think